There are too many stories of loss to cope with this week. Lives have been lost in the hundreds and homes in the thousands. At the time the disruption to life after 4 September seemed hard enough, but we are in a new world now. Take schools, for instance, which are out of action because drinking water and sanitation are not guaranteed, to say nothing of those with damaged classrooms. That's a physical problem, but there are some teachers and students coping with losing loved ones, and many more working out their future without a home to live in. That's a spiritual problem which, multiplied across many aspects of life and work in our city, is something never before encountered here.

How do those who name Christ as Lord and Saviour bear witness in this crisis? We serve a Lord who, on the face of it, has let us down not once but twice. The gospel in a nutshell could be described as 'the best is yet to be' but right now life has gone from bad to worse. Certainly we need to draw on our experience of lament and find new resources as one body of Christ in mission to our fellow citizens. How do we sing the Lord's song in a place of terror where over twenty people have died in our cathedral and another three people in Durham St Methodist church?

We may need to improvise in our theology. Dig deep into Scripture, mining Lamentations, Habbakuk and Revelation for words from God which address calamity and crisis. This is a time for faith like that found in Israel and on Patmos. When human sight suggested evil was present and God was absent, faith obstinately refused to let go of the idea that the God of Israel existed and remained committed to fulfilling covenant and promise.

Speaking of improvising in difficult circumstances, and keeping faith in God during dark days, the photo below is of a funeral held yesterday for Janet Baskill, member of the Parish of Woolston and former NZ Church Missionary Society missionary. (To be clear: Janet died before the earthquake). 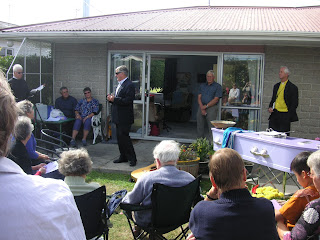 My father, Bishop Brian Carrell reports: "The funeral of Janet Baskill was held this morning in Woolston. In that part of the city there is now no undamaged St John's Church available, no electricity supply for an amplifier, no facilities for printing off orders of service, no water or heating for a cuppa afterwards, no toilets for mourners. So improvisations are the back patio of Jan's own house, a guitar, hymns from memory, led by Revd Mike Hawke, along with apologies for no refreshments and indication of a space behind a bush behind the garage for those desperately 'caught'. So the service proceeded, with a swarm of Janet's friends and CMS supporters and former missionaries of her generation in attendance, standing or seated on picnic stools they had brought. A moving occasion, as all present had arrived there with some measure of difficulty and deep awareness of the dark shadow hanging over most of the city."

Thank you for your prayers. Keep praying, especially for Bishop Victoria Matthews and other church leaders as they improvise ways forward.

Anglican Taonga now has Lloyd Ashton and Brian Thomas reporting regularly on events and church developments as they unfold.
Posted by Peter Carrell at 7:38 AM

Thank you Peter. I very much appreciate your honest and perceptive comments. I have posted some reflections along similar lines on my 'Hikanos' blog - largely in response to questions you so helpfully address here. Keep up your posts (when you can) - they are a significant ministry.

Still standing with you all.

The presence of mishap, tragedy or catastrophe is not evidence of the absence of God.

Continued prayers you all shall certainly have.

I'll second what Tim says about the significant ministry of your blog, Peter. You have gifts of insight, civility, charity and faithfulness for which I am grateful (and for which, no doubt, many others are, too).

And yes, Hermano David is quite right: even in the midst of this catastrophe, God is present. And so are your brothers and sisters throughout the Anglican and broader Christian world who wish to stand with you in prayer and solidarity.

It was good to hear this morning a heartening broadcast messsage of HOPE from our Diocesan Bishop, Victoria Matthews. She is showing great leadership in a situation of massive community devastation.

Bishop Victoria will be presiding at a Eucharist in St. Andrew's School Chapel this morning and has announced the various services that will be taking place in different churches around the city, outside the cordon.

She has intimated that already, there is massive support (local and from overseas) for the re-building of Christ Church Cathedral which is presently in a sad and sorry state. When asked how the project would be able to accommodate the fact that so many (up to 25 poeople) might still be found within the ruined tower, the Bishop said that this would be a focus for the grief of the City, where a memorial could be raised up to commemorate the totality of what this event has meant to both local and overseas people affected by the earthquake. Above all, the re-built and resurrected cathedral would be a sign of healing for all people.

Please conjtinue toi pray for those whose loved ones are still not located in the fallen buildings.
Jesu mercy; Mary pray.

I don't believe the Lord has let us down. I can't claim to understand why tragedies like the earthquake in Christchurch has happened, but at the same time, I don't believe that God causes these tragedies either. I do believe that God is there, with the victims, the survivors. He was there with the person trapped in the rubble, as well as with the family members grief stricken at the loss of their loved one, or not knowing.

I do believe that God expects us not to wait for miracles to happen, but to help our fellow man, suffering through the many travails and hardships, as we were called to be our brother's keeper, and not just when a celebrity talks about it, or it's an event half the world away, but those instances of tragedy and hardship in our neighborhood. The homeless, and hungry in our own communities. The men and women who right now are facing another night out in the bitter cold.

The Christian tradition and the Hebrew Scriptures from which it is born are rich with resources for this disaster. We don't really need anything new, rather, we need to reclaim what has been there all along. The Pss of Lament, (44, 55, 77, 88, 109, 13) the narrative laments,(Israel is Egypt, Hannah's Lament, Abraham and Moses talking back to God),Jesus's many admonitions to weep for yourselves and for your children. Cry out to the Holy One...for this is the most profound movement of our faith.

Hi Kathryn
I agree with you re 'reclaiming' rather than finding things new. 'Improvise' in the title is intended to be about working out the specifics for our theological response to this particular tragedy, drawing on Scripture and theology bequeathed to us, rather than inventing anything new.