Last week the Archbishop of York, John Sentamu and the Reverend Margaret Sentamu visited the Diocese - the last part of a trip through Fiji, Samoa and Aotearoa New Zealand.

There was a lovely welcome on Tuesday at Te Waipounamu, Ferry Road, the base of the ministry of Te Hui Amorangi o Te Waipounamu (i.e. the Maori Anglican Diocese covering the South Island). 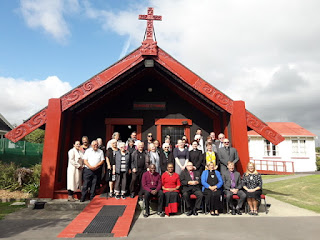 A fairly simple observation from the few days spent with ++John and Margaret, both in formal contexts and in informal chatting, is that, notwithstanding various attempts around the globe to paint churches such as ACANZP as some degrees short of being truly Anglican ( (because teaching falsely about You Know What), we are, in fact, (in my words) ordinarily Anglican. (I say "ordinarily" because it will never be a claim here that ACANZP is some kind of extraordinarily virtuous Anglican church, a benchmark and guide for others to follow. We are simply an Anglican church with the usual mix of the good, bad and indifferent occurring in our midst.)

I suggest the greatest challenge concerning "being Anglican" is whether "there will be an Anglican church to be Anglican in". Damian Thompson, writing at The Spectator (and also podcasting) makes this point:

"In every big city in the United States and Britain there are buildings – often quite magnificent – that were erected by Christian Scientists. But many of them are now offices and apartments, because this once thriving and very wealthy denomination is virtually dead.

In this week’s Holy Smoke podcast, I talk to Jon Anderson, an expert on religious and political sects, about the collapse of Christian Science – whose followers included Joyce Grenfell and Doris Day – and the scary lessons it holds for today’s mainstream religions.

There’s already a whole graveyard of Protestant denominations filling up in America and Europe. Could the more conventional bits of the Anglican and Catholic Churches one day end up there? What about Reform and Liberal Judaism?"

I don't think we will avoid the graveyard by being one thing or another on You Know What - it seems to me that for every person outside the church who might be attracted to a conservative resolution of this matter inside the church there are two people who are put off going to church by the church's conservatism on this matter.

We will avoid the graveyard by continuing to win people to Jesus Christ through sharing the good news of God's love, forgiveness and mercy to all people. But what we say in communicating the gospel will - presumably - need to be ever alert for what the Christian Scientists have failed in. (I am not sure what that is, not having listened to Damian Thompson's podcast, but I am guessing there will be something about the implausibility of Christian Scientism.)

What encourages me in this matter is finding young people not only identifying with our church but also making steps of commitment such as yesterday in one of our parishes when seven young people were confirmed and another young person baptised. (Of course all people of whatever age joining our church is important re our flourishing, but looking ahead 50 plus years, well beyond my own death, the "elders" of the church of 2070 will need to include wise and mature Christians whose adult journey in faith and discipleship begins now.)

There is absolutely no reason to be complacent about the future because there is no reason to think the aggressive and corrosive growth of secularism in our society will cease. But there are reasons to hope that the future for "being Anglican" is bright.
Posted by Peter Carrell at 7:59 AM

I agree with you, Bishop Peter, on this statement in the thread:

"There is absolutely no reason to be complacent about the future because there is no reason to think the aggressive and corrosive growth of secularism in our society will cease. But there are reasons to hope that the future for "being Anglican" is bright."

My chief reason for believing that the Church will not fail (Anglicans being just a part of the Body of Christ) is the Lord's commissioning of Peter: "You are Peter, and upon this rock I will build my Church and the gates of Hell will not prevail against it".

The Church is thus a divine institution; not limited to the power of its human membership to survive. This is the difference between a purely human institution and the sacramental life of the Body of Christ. While the Sacraments of the Church are being celebrated, and the Gospel (Good News) of redemption is preached, God's Church will survive its surrounding cultures - like the salt of the earth and like the yeast in the loaf.

"Through All Eternity You are God". "Deo gratias".