The good news and the tough news

A weekend in Hanmer Springs has been a tonic. Missed a big aftershock on Saturday night. But 'sang for my supper', preaching, presiding and baptizing in the Church of the Epiphany yesterday morning. Now, back in Christchurch, what lies ahead?

Some good news will help all Christians and churches this week: no one, in fact, died in or at Christchurch's Anglican cathedral. For days the prediction was 22 dead there. But despite tearing into one of the tower's walls, and pulling out the rubble, no bodies were found by urban search and rescue. This non-discovery is consistent with security camera footage from the time of the quake which showed no people movements in the tower. It is also consistent with anecdotes that there was a small moment of time between the quake and the crashing of the tower. Presumably people moved fast and successfully away from the tower and other falling masonry within the cathedral.

But there is a lot of tough news for Christians and churches to face. Here are three things which are at the forefront of my mind:

(1) Gathering spaces: yesterday some churches planned to have outdoor services, but the weather was not favourable to that. Where to plan to meet this coming Sunday? In some cases local schools which are signalling they will re-open this week may be available. What if they are not available? Further, what great long-term options can be found for those churches so damaged that it will be months if not years before repair or replacement is organised?

(2) People: it is all very well arranging a place to meet, but where are the people? Media say 20% of Christchurch has left the city. That percentage is quite believable. It will be much higher in the eastern and hill suburbs since lack of services there, or sheer totality of damage to houses means that if people haven't left the city they will have left those suburbs to live with neighbours and friends elsewhere in Christchurch. Then there is the matter of income for churches without people ... some live on a tight budget and a month or three with fewer than normal people attending could be very tough news. Somehow I do not think the government's help package for businesses losing income at this time will apply to churches.

(3) Decisions: there are lots of decisions to be made, some of which are urgent (e.g. how to minister effectively and sutainably to the local community) and some of which can be made slowly (e.g. when an undamaged hall provides an alt.worship space, what to do about a damaged church?). At the best of times significant decisions consume time and energy and demand of us the best our brains can give with analysis, discernment, and wisdom. These are the worst of times. Our minds are often on our own troubles, we are tired, and we are discouraged. Just one element of the discouragement to mention here: is it worth making a decision today when tomorrow we might have another damaging quake?

There is also the question of the layers of decision-making to be engaged with: parish and diocese, trustboard and Anglican Care, church and community.

But just at the point when the description can be made such that it seems an impossible situation, there is good news here: in a number of cases the damage to churches is so severe that demolition will take place and new possibilities for the 21st century are open to us. We love our stone churches, but they were not leakproof or warm or flexible for both church and community needs. The future may be less aesthetically pleasing, but it could be better than the past for the mission of God.

To conclude, here is an intriguing photo, supplied to me by Megan Blaikie, reporter and photographer for our diocesan newspaper: 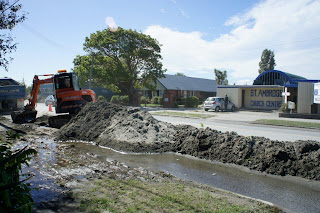 It was taken last Wednesday and shows a church which is open for ministry and mission - St Ambrose's, Aranui - via a foodbank and a cafe. That availability for mission is part of the good news for this church, and also for this community which has lost the community centre to the left of the church. The digger and truck is a glimpse of the good news of cleaning up the devastating silt in the east of Christchurch.

But the tough news is hidden in this photograph. To open the cafe, water needs to be brought in. The church complex is damaged - not so badly that it is unsafe, but badly enough to crack walls and jam doors. Let's imagine insurance will pay for repairs. But not covered by insurance is the change to the community wrought by the earthquake. How many will return to live here? The visible bit of the road is in good repair, but much of the rest of Breezes Road is a bumpy or rutted mess. Liquefaction has damaged it and closed down shops and petrol station. How long before this community is up and running again?
Posted by Peter Carrell at 7:39 AM

You are in my prayers, and it is hard to know what to say from afar. It seems though to me that whether and how the churches are rebuilt is very much up to you all, but may be beside the point. In such situations, often the churches are the only functioning organisations, and if you are so minded, this may be a God-given opportunity given to Christians to show what our faith is really about.

I don't know if it is any encouragement, but I was minded to remember another devastated city where the church was also faced with choices and some found that they had been put there for a purpose such as this or this.

There are lots of us praying for you and you all have our love and support. God bless

Thanks PM, and thanks for the links, as well as the prayers.

Some answers are emerging and in the days ahead I will be able to post about those.