Recently here we drew attention to Peter Hitchen's contribution on a steamed up television panel in Oz. Now attention has been drawn to this Daily Mail columnist columnizing on a visit to NZ, including Christchurch. His column is here. The important bits to ruminate about are the future of a little country in a world of declining and emerging empires. But there is a remark within the column for Anglicans ... on our cathedral situation!

Peter Hitchen's also talks about a fabulous train trip he took through our mountains. It happens that I recently drove through the same mountains and happened to come across the train at Arthur's Pass station. Here is a pic a few hundred metres down the road as the train gathers pace towards Christchurch. Taken from my smartphone (actually, not that great a camera!): 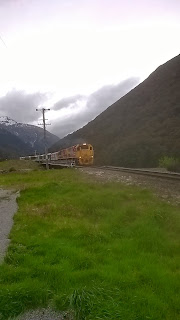 My journey was first to Hokitika on Thursday past, for a training course. Then the next morning to St Thomas' Runanga for a service celebrating 50 years of licensed lay ministry by Barry Smithson. I met and got to know Barry and his wife Lesta when I worked in the Diocese of Nelson (of which the Parish of Cobden-Runanga is a part). Barry and Lesta are well-known at St Michael's and All Angels here in Christchurch as they regularly make the pilgrimage through the mountains to participate in festal masses.

St Thomas' could be described as an outpost of Anglo-Catholicism in the almost uniformly evangelical, low church Diocese of Nelson. Barry and Lesta have upheld the Anglo-Catholic tradition in that church for a long time. It is a tribute to both them and their succession of evangelical vicars that an exemplary Anglican way of holding disparate traditions in common has been lived out through these years.

Anyway, we had a lovely service, to which Bishop Victoria has been invited to come to preside and to preach (superbly!). Barry was the lay reader. Clergy gathered from Nelson and Christchurch dioceses. The local Roman Catholic priest was present. The weather was superb (i.e. not raining, as is often the case on our West [Wet] Coast). There was a lovely lunch and some fine speeches, including one by Barry himself, as depicted below: 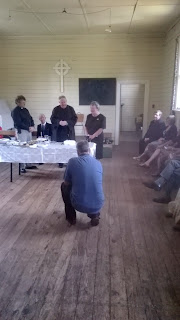 The person kneeling down was the photographer for the occasion. When he sends me a photo which will be 100x better than I can take, I will add it to the post ... LATER: here it is! 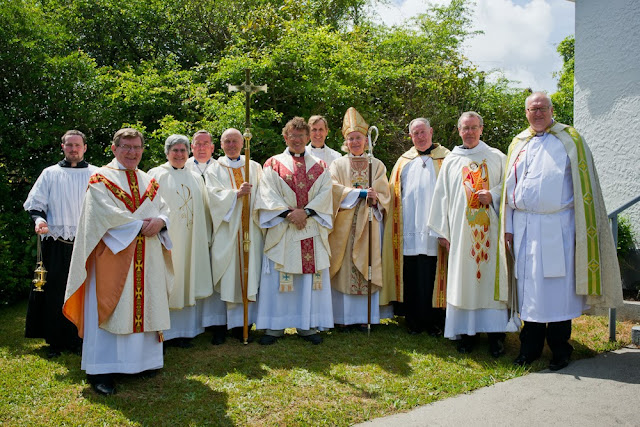 Posted by Peter Carrell at 7:32 AM