Those Anglican issues, they keep on coming!

So, last week, I named a few Anglican issues bubbling away.

I noticed another one during the week: the validity of Anglican orders (from a Roman perspective).

Isn't this a bit of a complicated matter? I mean, the validity of Anglican orders is the validity of the orders as ordered by God, not as validated by the Roman Catholic church ... isn't it?

And, while I appreciate that a Roman recognition of Anglican orders would open doors to greater unity between our churches (something I am keen on), what would such recognition mean in practice? Would it mean recognising the validity of men in the priesthood but not women? Would it mean Anglican priests could be appointed to vacant positions in Roman Catholic parishes? Could it mean that Catholics were permitted to receive communion when at an Anglican service? And vice versa? At an ecumenical service when Anglicans and Catholics join together for special occasions such as Ash Wednesday?

Obviously some important work needs to take place at a theological-conceptual level; and the dratted Papal Bull on the nullity and voidness of Anglican orders needs some deft footwork to get around it, etc. But I think I am more interested in the actuality on the ground of some changes in practice, whatever the carefully formulated subtleties we move forward on at a high but some what theoretical level are ...

Postscript, relating to last week's post: picking up again the brouhaha over a greater Communion say in the choosing of the next ABC, my fervent wish is that WE DO NOT HAVE A ROTATING PRESIDENCY.

The Anglican Communion in 2022: What's going on?

Here in NZ it is only 23 January 2022, but already we have enough Anglican "ishues" to keep a blog going for the rest of the year. Let's introduce them (in no particular order of significance for the present and future of the Communion).

Ian Paul takes up the question whether the CofE is going about the making of senior appointments the right way, having announced the appointment of the Archbishops' Secretary for Appointments is a man married to another man. The wider Communion question here (aside from the role I imagine this appointee has in the selection of the next ABC) is facing the reality of a changing world.

Are English Anglicans overly sensitive? Another recent announcement has been the increase in numbers (1 to 5) of persons representing the Anglican Communion in the choosing of the next ABC. Cue curfuffle, ruffled feathers, and vigorous expressions of concerns: here, here, and elsewhere.

Apparently we are in danger of choosing an Anglican pope (I fail to see where the Communion supplies the majority of votes in the process);

or of not getting the theology/ecclesiology of the matter correct (I do not share the concern which seems to not appreciate NT moves re leadership which were pragmatically appropriate to the needs of the hour);

or there is some kind of continuance of colonialism going on (sure, colonialism drove forward the expansion of Anglicanism globally, but the point now is whether the ABC inhabits a role of historical and geographical importance, measured not against the expansion of the British empire in the 19th and 20the centuries, but against the great historic episcopates and patriarchates of Christianity);

or of letting some conservative evangelical in (per influence of the majority Communion which, of course, is not completely aligned with the hopes and dreams of liberal English Catholicism) who will hold back developments and progressions easerly sought by ... well, it is not necessarily a majority of the CofE itself, is it?

Isn't the general point that whomever is appointed ABC and by whatever collective of minds and hearts, the ABC of tomorrow and of the day after tomorrow, will need to be a person who can hold the centre ground, controverted though that centre is, between the centre of English Anglicanism and the centre of Global Anglicanism?

Speaking of evangelical Anglicans, the Winchester College report on Smyth is out - Thinking Anglicans has a note here, with links. This story is painful and few associated with it emerge with credit - essentially it is the whistleblowers whose courage is in credit; most others are in deficit. In this story and in the story of Jonathan Fletcher, Anglican evangelicals have searching questions to ask, not least about the role of authority figures in the movement. (Speaking of Anglican papalism ... any authority figure anywhere in Christianity can become an unchecked power for no good.)

Finally, at lest for this week, Richard Burridge once stayed with us here in Christchurch and one abiding and pleasant memory of that week was his deep commitment to ... golf! But he is now in Anglican news because of his new book on Zoom eucharists, Holy Communion in Contagious Times, with an intro here, by the author himself, published in the latest Church Times. His thesis is straightforward and will be agreeable to many (as reported in another CT article), a Zoom eucharist (i.e. involving a priest and viewers in their own homes with bread and wine before them) is effective and valid. We should all read his book before determining whether he is right or wrong.

My 2022 is off to a very good beginning - we had a fabulous family wedding at the weekend (publications of pictures thereof reserved to the happy bride (our daughter) and groom, so none here from me) and currently I am very briefly in Auckland having made an unexpected, challenging but wonderful trip with my son to drive a caravan from Christchurch. (The challenge was in in learning to tow a caravan!)

En route we stayed in Waiouru and - of course - I took a photo of the majestic mountain, Ruapehu, which dwarfs the sky when facing west: 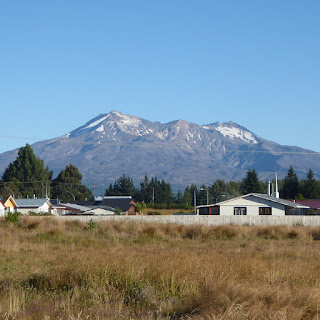 Ruapehu is an active volcano. Its capacity to cover the earth around it with rock and ash is readily observable in the landscape around the mountain, and very noticeable as we drove northwards up the Desert Road.

Our trip (as with all my trips around and through Waiouru through my lifetime) was benign. On this occasion, the sun shone, the rivers flowed crystal clear, and we had a magical lunch time on the shores of Lake Taupo (itself the result of  an unbelievably large volcanic eruption in the distant past).

Not far from our country, a little to the north of us, within the Kingdom of Tonga, an active undersea volcano erupted massively at the weekend, wrecking lives, livelihoods, so far killing two people (that I have seen news of) via the resultant tsunami, and sending a sound wave such distance that not only was the sound of the eruption heard in NZ, it was also heard in Alaska. Details about actual extent of damage this eruption has caused are sketchy - communications between the Kingdom and the outside world have been effected.

It is not the happiest of beginnings for 2022 for the people of Tonga. Much as I count my (and my family’s) blessings at the beginning of 2022 and give thanks to God for them, I must simultaneously ask God,

What is going on?

(Not the first time such question has been raised here).

I was going to begin this year’s posts with some vacational ruminations on the state of global Anglicanism (i.e. what is going on ecclesiologically, ecclesiastically but also theologically) but that sounds a little abstract when Christian brothers and sisters in Tonga (some of whom are Anglican) are in trouble and strife. Yet, the same question drives my as yet unposed Anglo-ruminations:

Dear God, What is going on?

Let’s see what sense we can make of things in 2022 as the year progresses!