I need to be realistic. I am not going to get a second post in a proposed series on Islam out this week. Possibly not next week either, but I will have time to do some reading next week in preparation for post number 2, perhaps on Monday 29 April.

Meantime, it is Holy Week, and, very sadly, as I write, there is news of Notre Dame, Paris, on fire - and a huge fire at that. An amazing cathedral and one I was privileged to visit in 2015. But there is also a sense in which the world of religion is on fire this week.

Particularly Down Under where Israel Folau, gifted and prodigious Australian rugby player, has just been sacked by Rugby Australia. Their grounds for sacking focuses on a breach of code of conduct in respect of social media postings (and, on the face of it, having given Folau a huge break a year ago when he cause significant controversy, they are right to sack him on these grounds because he has defied RA as his employer). But what he Tweeted - about various kinds of sinners, including homosexuals, going to hell - has caused offence and brought on widespread condemnation across Australian and New Zealand mainstream and social media, while simultaneously raising further debate about free speech versus hate speech. For different Christian responses, from significant Australian Christian voices, read David Ould and Brian Houston. I think it reasonable to say that whatever Israel Folau thought he was doing, he didn't think deeply enough about what helps the whole Christian cause Down Under in respect of preaching the gospel of grace.

Here in Aotearoa NZ, many Christians, arguably even over 90% of Christians, are on fire because of a bill bearing down upon us which would legalise euthanasia. Except the bill is messy and ambiguous and seems to offer some kind of "on a wing and a prayer" approach to future termination of life. Our parliament has done wonderfully well, with great efficiency, in passing a gun control bill in record time. It must do good and not bad on this matter of euthanasia!

OK need to close. I am due to meet the President of Religious Affairs, Turkey, this morning. Interestingly, according to some preparation material, this state department produces a sermon each week for reading out across thousands of mosques in Turkey. Now that is a thought for a Diocese ... :)

Finally, social media is no place to debate the intricacies of religion is my "conclusion of the week." It is a bear pit in which speech becomes a form of shouting, all too quickly. But yesterday I came across a wonderful thread which summarises the theology of Origen, including his extraordinary vision for the universality of divine love. The thread is not only wonderful for its summarising power, but also for its recognition of how Origen's theology necessarily must engage with Augustine's.

Here is a selection to ponder during this week of holy devotion to Jesus: 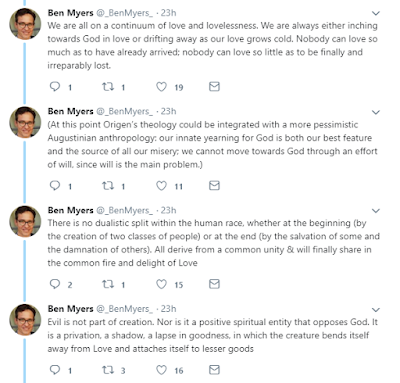 Posted by Peter Carrell at 6:44 AM

Regarding Israel Folau - Michael Reddell wrote quite a substantial piece on the whole affair in his Croaking Cassandra blog https://croakingcassandra.com/2019/04/13/honouring-israel-folau/

Without wanting to wade into that debate again, no matter where ones stands from a Christian perspective my main issue with what he posts is that it seems to fail to make that vital distinction between "sin" and "sinner" - some of his more detailed material might, but the basic posts or memes (or whatever they are called) don't. Most people seeing it are not going to get that subtlety - it possibly may not make much difference as far as Rugby Australia are concerned anyway.

Personally I feel that there must be a better way for him to promote his faith in a more edifying way that is not such a challenge to his employer - but probably a bit late now!

Hi Peter,
I would also point you to this good blog post by Murray Campbell on the Israel Folau issue.
https://murraycampbell.net/2019/04/16/when-talking-about-hell/

Re Turkey's minister of religious affairs, their Egyptian equivalent specifies the topic (which is compulsory), and provides a text (which is voluntary). The idea is to stop rogue (read Salafist or Muslim Brotherhood) imams from expounding on non-government approved topics.