Saving the church from its statistically inevitable death?

Recent news out of the CofE is that its inexorable decline in adherence continues, arguably at an alarming rate. Not much is different in Australia and New Zealand. Also Down Under, like in Britain, Catholic and other churches are holding their own (more or less) and the overall belief in God box ticked numbers are going downhill.

Thus I read this thread on Twitter this morning with interest: 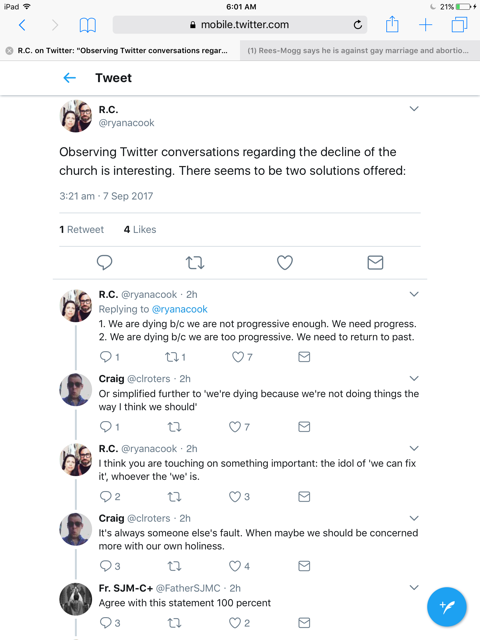 
Observing Twitter conversations regarding the decline of the church is interesting. There seems to be two solutions offered:
— R.C. (@ryanacook) September 6, 2017


I think Ryan Cook is largely right in his next Tweet that on Twitter and elsewhere on social media (including, we might observe, this blog!!) there is a quickfire reaction to church decline which (a) blames and (b) globalises the problem with antithetical - they both cannot be right - conclusions.

Not progressive enough? Yeah, right (as we Kiwis say). All those cool dude atheists with strong social progressive agendas and antiTrump stickers on their car bumpers are just waiting for the moment when the church approves SSM and drops its opposition to abortion and euthanasia.

Not conservative enough? Yeah, right. All those keyboard warriors with their white is might, government is always wrong, world is going to hell on a skateboard named Gramsci (cultural Marxism) are just waiting for Francis and Welby to stop their ambiguities on social policies and their neoMarxisms on economic policies and then they will turn the computer off in order to activise in the church instead.

If you search diligently on the Twitter thread above you will find my own tuppence worth. Here I summarise as this:

Whatever number of Christians left in the world, we must be faithful to the gospel. We must believe that Jesus Christ is good news for the world though the kind of good news that many will reject. But we must not subvert the good news by mistaking it for this (progressive) or that (conservative) agenda. The good news of Jesus is very good news but it is very good distinctive good news.

Our challenge is to find that distinctiveness in today's world (a challenge because some blurring has occurred through the centuries of Christendom) and to communicate it in terms which relate to the context in which we live.

A translation of course which did not create five different gospels - a Martian looking upon the global church today could be forgiven for thinking that today's church has lost sight of that simple historical fact!

Actually, buried in global statistics of decline are narratives of growing churches. Churches, that is, which are translating the gospel in a manner which is understandable of the people. Here in NZ I too see that happening, though perhaps not as frequently as desirable.
Posted by Peter Carrell at 6:46 AM

Personally, [insert name of anxious poll-watcher], I don't care much about the percentages of national populations adhering to this or that religion.

The Constantinian settlement was a good thing for the West and for England, but it does not define Christianity per se and is not necessary to a healthy church anywhere. And just because of the disparity between mass perception of the gospel and the actual gospel mentioned lately, departures are not necessarily bad thing. They may help those remaining to achieve more solidarity.

Religious movements shrink by losing market segments as wholes, but they grow by maintaining an ethos in which converts become converters themselves. Hence the tension between liberals trying not to lose any more segments, and evangelicals trying to increase zealous proselytising. Probably, a national church on the right path will have still have plummeting membership for a long time until the conversion curve begins to steepen and arrivals outpace departures.

Twitter is only for Twits - that's why Donald Trump uses it, to devastatig effect!

I was watching an English quiz show the other day and a contestant was unable to answer the question of who killed Abel but was easily able to name Beyoncé's twins...

Bowman on the thread you refer to used the term "folk Christianity" which turned out to be the (usually mocking) "theology" of the mass media, a grotesque caricature of Christian belief

And here is the thing - I was watching a Russian movie soon after watching the show where the contestant was unable to identify Cain and the dialogue assumed the audience would know that Cain killed Abel, a little thing to be sure but an indicator of shared cultural background knowledge now being lost in the English speaking world.

The Church is all but invisible in out modern world and when it does get press it is almost always negative.

You might raise on this blog the matter of vestments or clergy dress in public and I might suggest that they raise the visibility of the Church - the above mentioned Beyoncé does not wear everyday street clothes when she performs nor when she appears in public and if she did nobody would know the names of her twins or care less.

I was at the supermarket not so long ago day and there were three nuns from the Little Sisters of the Poor, in their habits, at the entrance quietly asking for donations of groceries - it was beautiful to behold

Postscript: A more interesting question is geographical: where are the future heartlands of Christianity taking shape? Where in the world is the faith being taught and practised in ways that have intrinsic authority on the ground elsewhere?

" A more interesting question is geographical: where are the future heartlands of Christianity taking shape? "

Well we have some clues Bowman - Africa, some parts of Eastern Europe, South America maybe but I read the other day that every Sunday more people in China go to Church than in the all the nations of the EU

Statistics do have a certain place - ask Luke/Acts! Thereafter, they might suggest we need to probe deeply the reason for trends. And having lived long stretches in various segments of the globe, I'd endorse Kenneth Latourette's ebbing and flowing thesis on the Expansion of Christianity. The West has turned to worship its idols, while some key Majority World locales are worshipping the Living God, through Jesus the Messiah of Israel. Just so, with whom is the Church allied?

Hi Bryden
Absolutely.
We need a lot longer view than, for instance, some speakers had at the Synod, thinking about the next generation or two rather than the next century or three!
But, also, thinking of allegiance, is it not a complex thing, this relationship between church and state, and church and society?
Even one of the hardiest churches, re ebbs and flows, the Russian Orthodox Church has had its moments under various rulers, including, it is alleged if not proven, occasions when its Patriarchs have been in the employ of the KGB!

Ah yes Peter: "complex allegiances"!! And I sense that is why the likes of Augustine are reluctant to view the parable of the wheat and the tares in anything other than an eschatological way. Bearing in mind of course that that very eschatology is BOTH Future and Present ...!