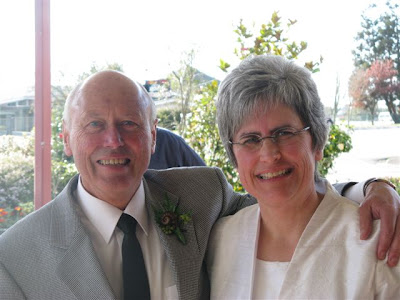 A further note about Anglican angst and Romans 14 came to me during a special occasion on Saturday. Teresa and I were present in Greymouth (our most south-western parish, 3.5 hours drive from Nelson) for the wedding of Marge Tefft and Robin Kingston. Their wedding was a fabulous occasion, and is a serious candidate for Anglican Wedding of the Year in 2008. As the bride marched up the aisle the packed church burst into spontaneous applause.

Behind that applause lies a remarkable tale of Robin a confirmed bachelor in his sixties welcoming Marge from the States to the parish in 2004 for a short placement at the end of her Fuller degree. Some remarkable chemistry between them resulted in the 'crazy' idea that Marge should be come Robin's successor as Vicar of Greymouth and Kumara. The idea was crazy because Marge was a US citizen, not yet committed to becoming an Anglican clergyperson anywhere, and unknown to our Diocesan discernment process. However it was a very good idea. (Even I thought that at the beginning, especially when I saw Marge fitting in so well with parishioners engaged in some full-on servanthood during our Synod, held in the parish that year). The chemistry, by the way, also led curiously minded people - I was one of them - to wonder if there was some romance going on. No, not at all, we were assured.

Anyway time passed by, Marge, after much prayer for guidance, returned to the Diocese, became the curate in Greymouth and Kumara, and then, this year in February, became the Vicar of Greymouth and Kumara. Something about being retired seemed to clarify Robin's mind, and in May, in front of the congregation at Holy Trinity, he proposed to Marge! The news that Robin, now 66, former vicar, and Marge, now 50, current vicar, each of whom had never married, were to marry made some news waves around NZ and the world.

We have had the lousiest of winters here in NZ, and our West Coast on which Greymouth lies is known for good reason as the Wet Coast. But Saturday was a picture perfect peach of a day. The wedding went off spendidly, and the photo here (by Pauline Tisch) shows the joy of the happy couple!

Naturally we had the reading from 1 Corinthians 13. If the actual words 'love never gives up' were not read, that phrase certainly entered my mind. I thought about my sermon the next day, and the Anglican Communion's crisis which I wanted to touch on. If we love one another, in line with the injunction of Romans 13:8-14 , and in the spirit of Romans 14, if we seek to work out this complex crisis with and through love, then 1 Corinthians defines that love as a love which never gives up.

How great is God's love for us. It never gives up. How great is our love for each other?
Posted by Peter Carrell at 5:23 AM