After the Quake - Monday

I hope readers might indulge this blog a little if posts for the next few days focus on the thing most immediately on my and many Anglicans minds hereabouts: the earthquake, damage to churches, and general pastoral needs following the quake in which all are upset as far as personal equilibrium is concerned, and some are facing serious challenges re living without water, power, sewerage, and others face major questions around future housing. I will return to the question I introduced recently of an 'Anglican Magisterium', but here is some of the news as I glean it from here and there.

According to a Stuff.co.nz report, churches damaged include:

"Churches such as the Oxford Tce Baptist Church, St Cuthbert's (1862) in Governors Bay and the Holy Trinity Anglican Church in Lyttelton (1860), and St John's Church in Hororata suffered major structural damage, with parts of walls dropping out and parapets falling.
Dean Peter Beck said Christ Church Cathedral had fared remarkably well.
"My thanks go to the council for all that earthquake-strengthening work," he said.
"Without that, we would have had major damage." "

But I am also aware of damage to:

St Mary's Merivale (and Hall and Vicarage), St Luke's Manchester Street, St John's Latimer Square, St Barnabas' Fendalton, St Matthew's St Albans, Holy Trinity Avonside, and Rugby Street Methodist Church and Hall, and St Mary's Timaru (at least one photo on Stuff.co.nz shows the loosened tip of its spire being lifted off by crane). In some cases this damage could be structural as well as superficial.

Further footage of St John's Hororata, with an interview of its vicar, Jenni Carter, is here (courtesy of NZ Herald).

In response to two reader queries: Rugby Street Methodist Hall is extensively damaged, and there is a significant structural problem for the church, visible to the naked eye, as bricks have been loosened at the foot of the spire on its tower. (Some of this has been featured in the news with the pastor being interviewed). Yesterday driving past the main (brick) building of the (Anglican) Community of the Sacred Name, I noticed some pieces of the top of the building had fallen off, but the building as a whole looked okay.

At this time our Anglican Centre, in the heart of Christchurch's central business district (CBD), is closed, waiting (a) a building check, (b) general opening of the CBD to people and vehicles.

Some further reporting, pics, and links to pics are on Liturgy here.

My own main place of work, Theology House, which leases rooms in the Hall at St Mary's Merivale is currently shut, Civil Defence having closed the building down pending inspection by engineers. (Prior to the closure I was able to inspect our rooms and fortunately they are relatively undamaged). Below is a picture of the Hall. Apart from the obvious visible damage in the centre of the photo, above the entrance way is a set of windows (my office) and above that, scarcely visible in this photo, the bricks in the apex of the wall are caving inwards slightly. 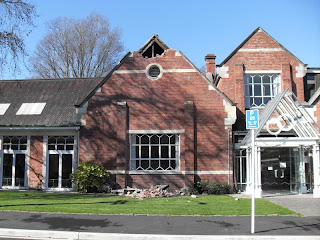 I believe that at least two other notable church buildings are significantly damaged but will await confirmation before naming them.

Thank you for your prayers. Please keep praying. Considerable wisdom is needed, as decisions of all kinds will need to be made in the days, weeks and months ahead. Some more than others among us will need considerable patience as we wait for relevant authorities and experts to make decisions about safety of buildings, as well as their future viability. And one can imagine some interesting conversations will be taking place with insurers ...

Incidentally, after shocks are continuing, including one about an hour ago as I write. It is as though a railway line has been built beside our house. Is that another train coming ...

See also Anglican Taonga for news and pictures.
Posted by Peter Carrell at 6:32 AM

Hi Peter. My thoughts and prayers are with all in Christchurch and surrounds at this difficult, interesting, challenging time. A ? - I am supposed to be coming to the Messy Church conference next weekend with a colleague - am I safe in presuming it is no longer being held? Have tried to call Theology House, but now understand why the answer phone is on! Thanks very much (sorry to bother you with what might be minutiae at this time). Emma Parry

Thanks Emma.
MESSY CHURCH CONFERENCE is still on!
(Woolston church is in fine fettle. And we think that by that time life will be more normal)
Cheers,
Peter