Should the church(es) be involved in political statement making?

For a week or two, as I drive out of the Anglican Centre/Theology House precinct based at St Peter'sm Church Corner, Upper Riccarton, I have noticed the following sign: 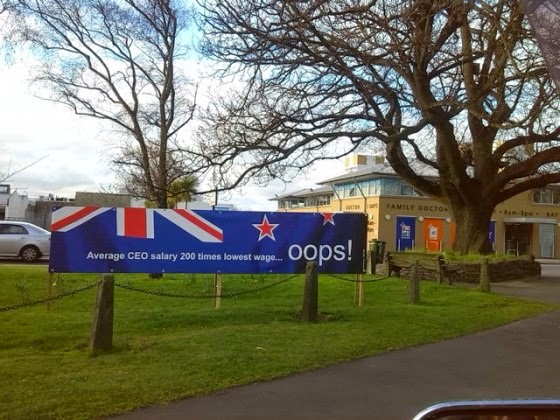 If you cannot read the statement it is, 'Average CEO salary 200 times lowest wage ... OOPS!'

To be honest, I thought the flagged background meant this was a billboard erected by the NZ First Party (which can have a leftwards lurch to some of its economic policy). It turns out the sign is erected by some group in the church(es) (Methodists?) and, obviously, it has received permission to be on Anglican land.

David Farrer at Kiwiblog has posted about the sign and churches campaigning during the run up to the election. He concludes with a confrontational comment:

"That reminds me that I must find time after the election to work on a members’ bill to remove tax free legal status from churches in New Zealand. They should have no special status beyond that of any other NGO."

Given that David Farrer is a responsible and influential blogger and media pundit with strong links to the National Party, this is not necessarily an idle, inconsequential threat. His threat does not fall on deaf ears as you can read in the comments, many of which object to the church having any role in 'politics' though charitable works to help those who suffer because of 'politics' is fine!

One response that I have to the statement - now that I recognise its provenance is not that of a political party - is that it is a confused and confusing message. Confused because it falls into a trap of taking a selective statistical statement and using that to highlight a message without offering clarity as to what the message is. That CEOs should be paid less? That CEOs being paid up to 199x the lowest wage is okay but a line is crossed at 200x? That we are an unequal society? But we are an unequal society when a CEO is paid 5x the lowest wage. That we are a grossly unequal society?

My final critique of the statement is that it does not convey much sense of what we are to do in response. Avoid voting for ACT (the party most blatantly supportive of economic inequality)? Vote generally leftwards because ... well, which party on the left has any policy to control CEOs salaries or salary packages? Vote for a better society? Why not actually say that? E.g. 'This election vote for the best NZ ever' or 'Vote this election for a NZ which cares for the poor'.

Well its a little obscure, and the source of origin should be more obvious, I would say it probably is supporting a campaign for increasing the minimum wage?

Yes, for churches voices on social issues. Good example recent event in Wellington Cathedral re child poverty attended by 1000 people. Another one the Aussie church taking a stand on the treatment of unaccompanied refugee children in holding centres. No to alignment with a specific political party.

No to bloggers or government or anyone using such statements as making churches pay tax in order to bully them into not speaking out on topics that make them uncomfortable. Control by threats is the path of cowards.

As far as I am aware churches receive similar tax advantages as NGO's simply because they are not for profit. Doesn't this make sense?

Churches or church organisations have already taken over many government contracts to provide social services, and this excludes direct church based community welfare initiatives.

As for wealthy churches (money tied up in properties with buildings below earthquake standards) - yeah right. The volunteers lining up to pay to bring them up to standard and fork out the insurance bills so the are seen queing all over the country.

From a casual look, it seems to be addressed only to those who have better than average eye-sight - certainly not to vehicle drivers, 'en passant'.

The real problem would be if clergy were earning more than an average wage.

My grandfather was a working class bus driver in Leicester (not far from Ron's home). He was sometimes heard to complain at times about bishops 'living like little lords in their palaces'; this was a real stumbling block to him taking the Chrurch of England seriously. He was not irreligious but he never went near a church.

So I'm inclined to agree with Ron.

Sanctimonious meddling priests? Is it sanctimonious to observe that there is vast wage inequality in the world? Seems to me the prophets of Israel made similar observations.

Usually it's the Left complaining about what Christians have to say.

You will no doubt know about clergy and the average wage. Reminds me of when a cousin, with wide eyes said to mum, so your'e a Priest now? Is that because it pays well : ) ,,, When she said she wasn't paid (then non stipended) he was most perplexeed about why you would do such a vocation!!

Eric perhaps in terms of theology but not politically in NZ anyway, should say there is a fair mix of the political left and right in NZ but like the major parties here most are centric, right Peter! : ) ?

I keep wondering Jean whether the 'centre' politically is about a path between left and right, or a path involving (the best of) left and right!

It's not. It's about the fallacy of assuming the centre of the Overton Window at the moment (in whatever context you find yourself) is always most likely to be true... total capitulation to context.

Another comment on this thread - from today's Collect, for the Feast of the Beheading of John the Baptist

"Just and merciful God, you called John the Baptist to witness to your commands, even at the cost of his life; give us courage to contend for justice and to speak for the oppressed, to the end; through Jesus Christ, our redeemer. AMEN."